Chris has been Head Chef of The Olive Tree Restaurant at The Queensberry Hotel in Bath since February 2013.

Chris’s career began at The Crown at Whitebrook with James Sommerin. He was fortunate to be in the brigade when the restaurant achieved a Michelin Star. The style of food that James was preparing and the detail associated with preparing food of Michelin standard set the foundation for much of Chris’ own cooking philosophy.

From The Crown, Chris moved to work at The Abode Exeter with Michael Caines. After a year there, he was offered the opportunity to move to Gidleigh Park, where he worked as Sous Chef for the next three years. Working alongside Michael for those years was a great opportunity to further develop his culinary skills in one of the country’s leading kitchens.

Chris then decided to move on to further his knowledge of modern culinary styles. He spent just under a year at The Fat Duck in Bray, followed by six months with Adam Simmonds. These positions helped him to define his own style of cooking, drawing upon all the experience that he had gained working in these first-class kitchens.

He then returned to work with Michael as Executive Chef of The Abode in Chester. This role was a great opportunity to learn more about the management side of the kitchen, exposing him to responsibility for budgets, purchasing and staff management.

It is unsurprising that with such a carefully balanced education Chris has achieved such high recognition in his first year as Head Chef of The Olive Tree. His passion and drive to deliver exceptional standards of dining were recognised with three AA rosettes in under nine months and his first Michelin star in 2018. His focus on his relationship with local suppliers, and his commitment to seasonality in his menus underpins the quality that he offers to guests in the restaurant. 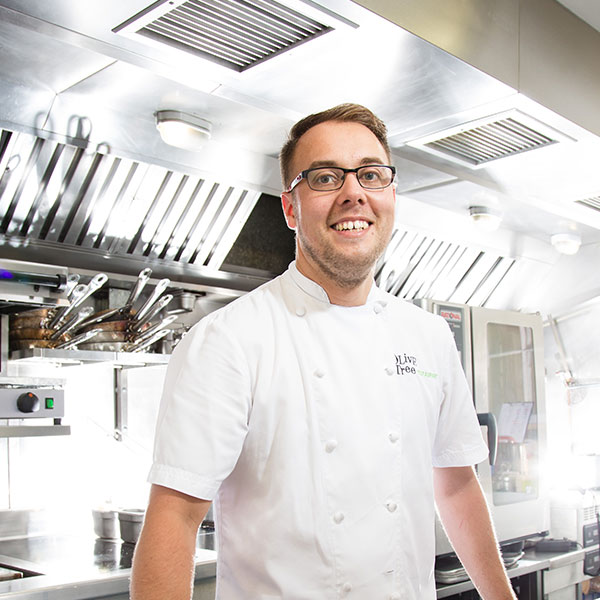